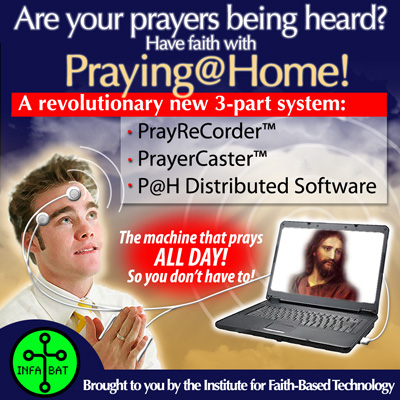 Praying@Home is a parody of Christianity's attempt to validate itself in the scientific academy, as seen in "scientific" studies about the effectiveness of prayer, creationism, intelligent design, and faith healing. Our fictitious group - The Institute for Faith-Based Technology - claims to be interested in finding a link between technology and faith, seeming not to notice that their attempts undermine the very idea of faith - namely that it doesn't care about evidence. They believe that praying is a purely mechanical task and should be dealt with like any other task that is such a waste of human effort - by mechanizing it. In so doing, not only do we save time, but we take advantage of the added efficiency, tirelessness, and networkability of computers to multiply the worlds prayer output infinitely, thus solving all of the worlds problems and creating a utopia on Earth.

The Institute will invite visitors to try out their PrayerRecorder and PrayerBroadcaster technology at the Expo in an attempt to get them to buy the home version. As a marketing scheme, the Institute has announced that they will try to collect 375,000 "Beckells", or "Standard Prayer Units" (discovered by Fredrick Beckell in the 1970s) during the Expo. Each user who volunteers to kneel down in the booth and use the PrayerRecorder contributes a varying number of Beckells depending on the purity of their thought and the strength of their unique Prayer Signature. T

he Institute also displays a not-so-subtle favoritism towards Christianity, simply assuming that the Christian God is the "correct" god to pray to, while also imposing their on values on the users by warning them against thinking any un-Christian thoughts while operating the PrayerRecorder. This very dystopic attitude betrays the fact that the illusion of utopia often hides a darker truth.

In society today, criticizing a persons religion is often seen as un-PC at least, and completely taboo at worst. Religion is given special privileges in most areas of public life, from politics to casual conversation, where other beliefs, like non-religious pacifism, are not protected by the law. People treat religion as if it is something immutable, like race or sex, rather than as a choice that a person makes for themselves. Through this parody, we hope to open a debate that is often enthusiastically avoided by forcefully insisting that religion should be open to criticism just like any other belief. 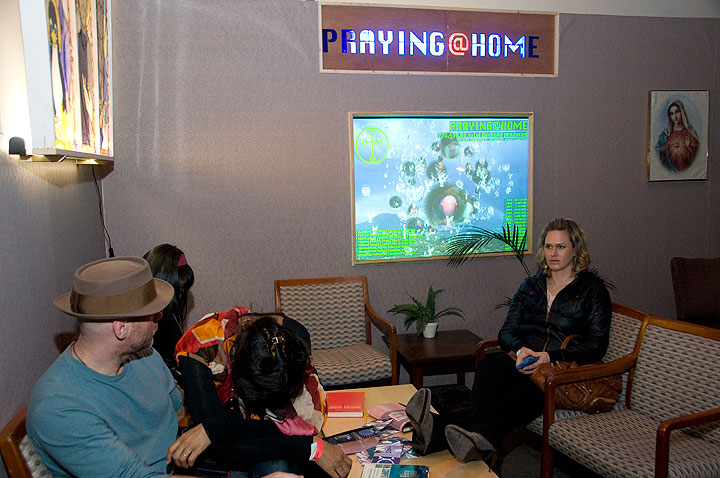 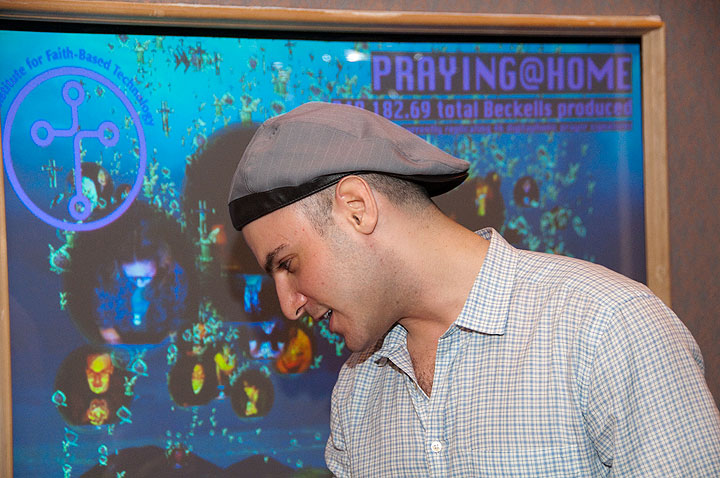 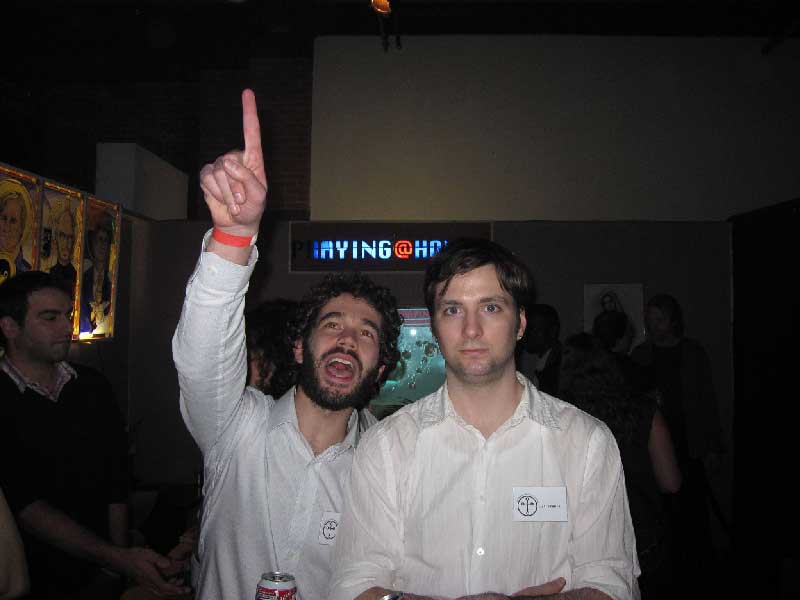 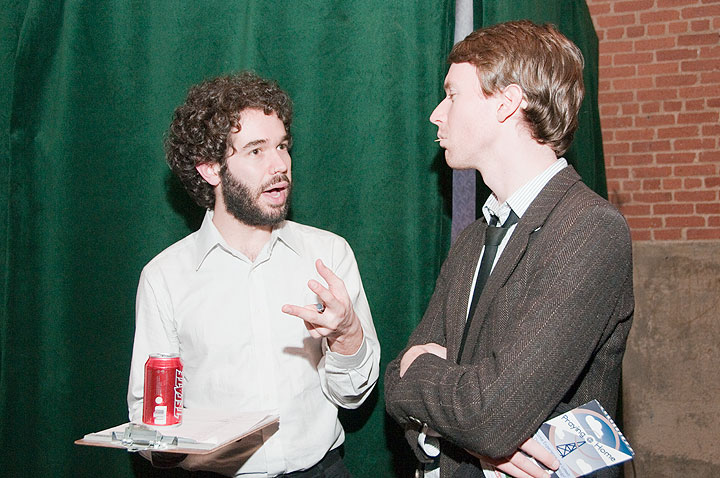 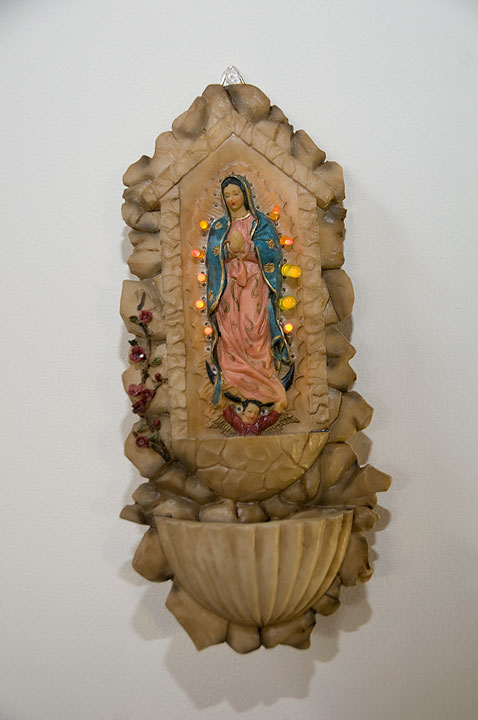 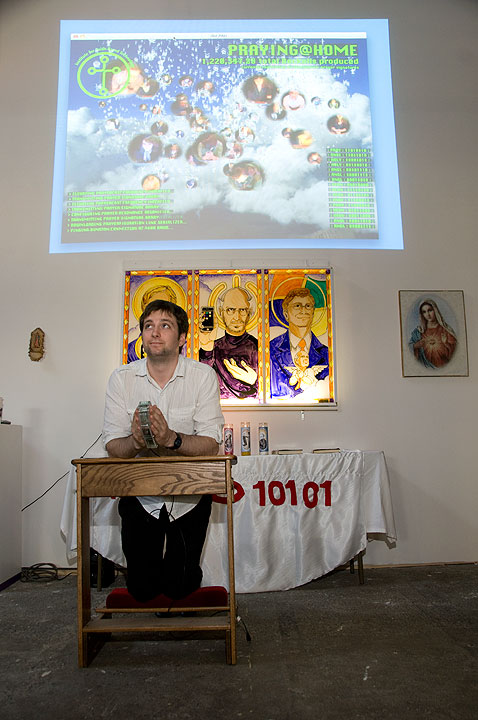 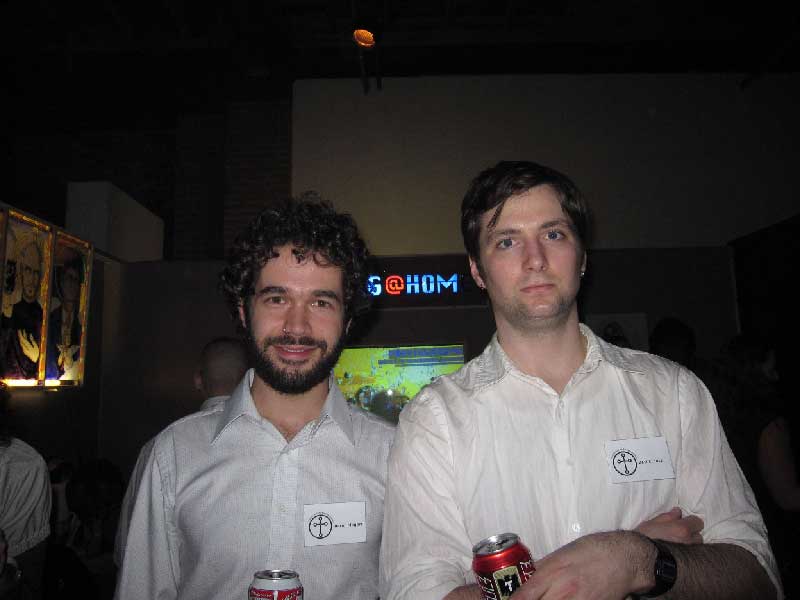 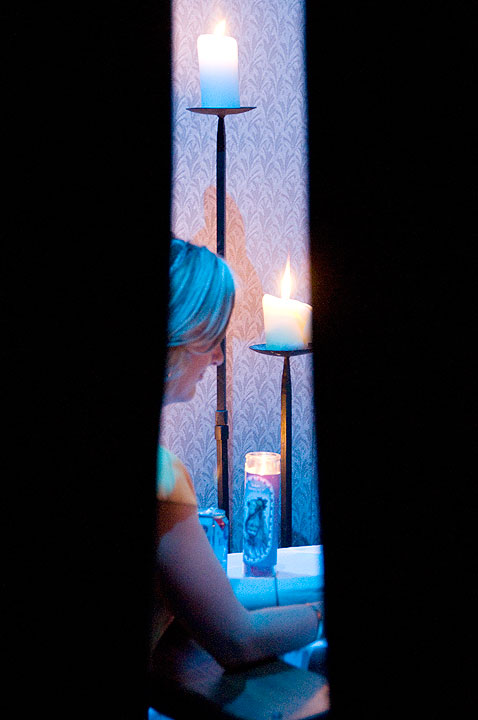 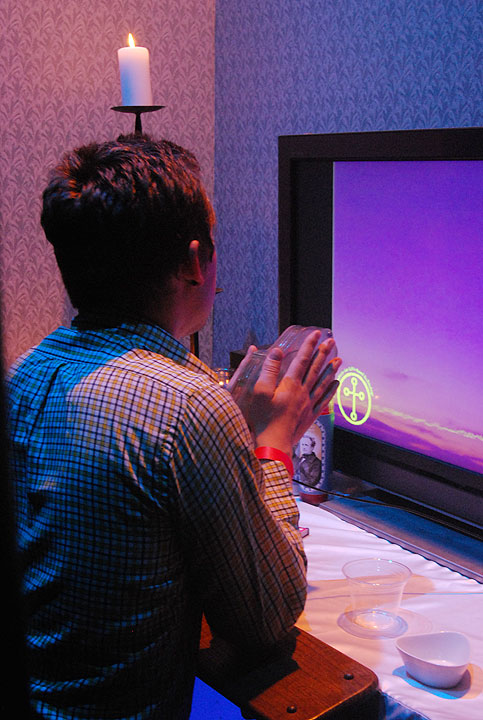 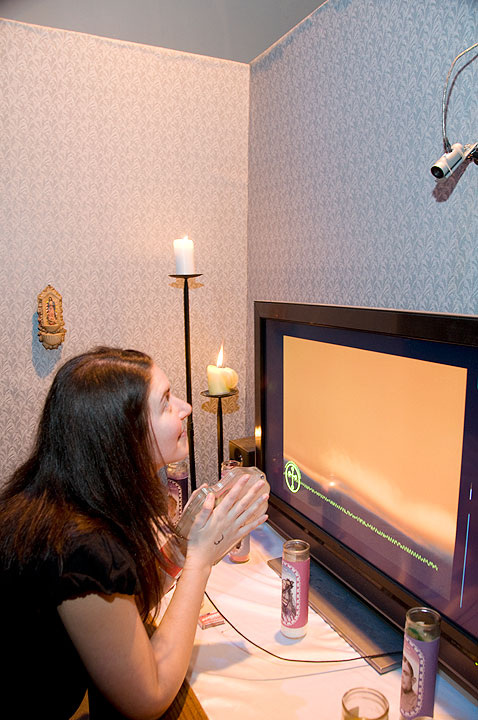 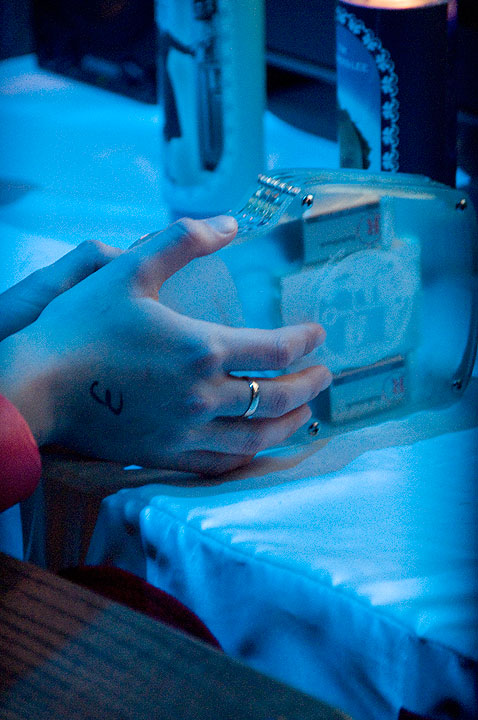 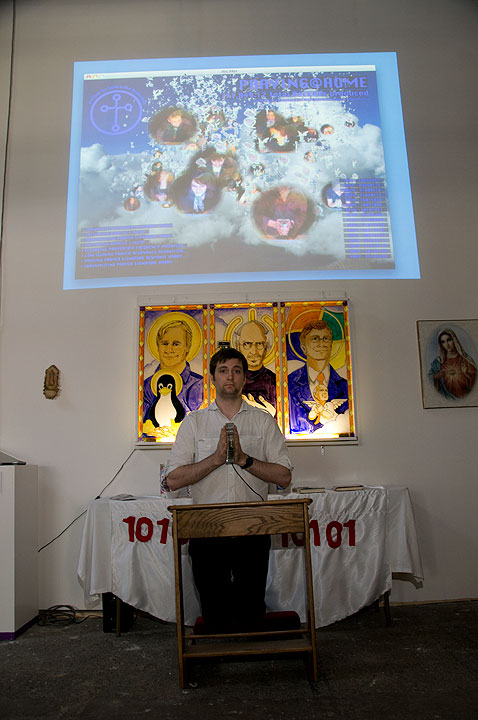 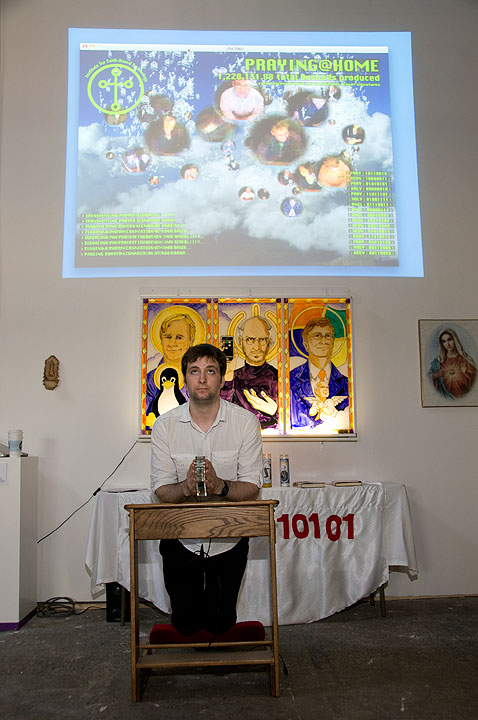 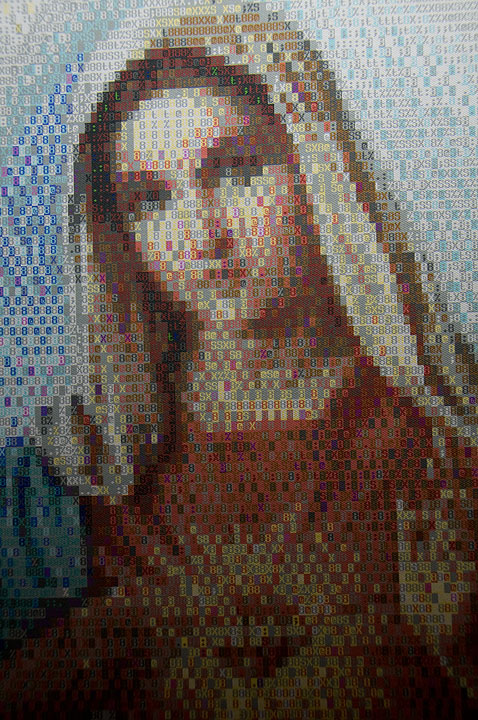 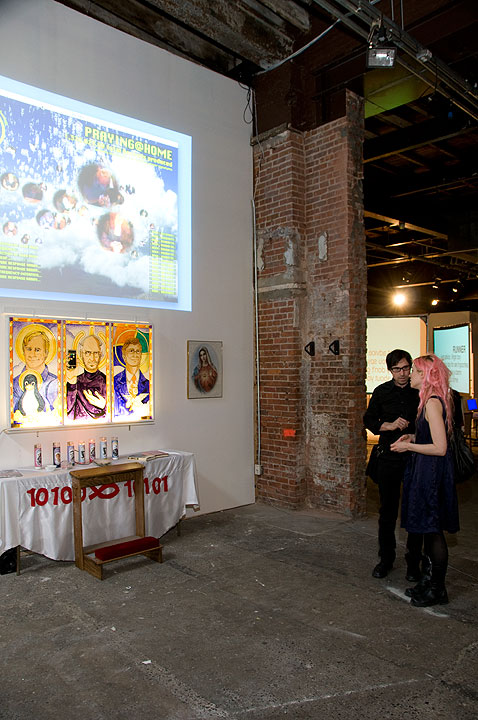 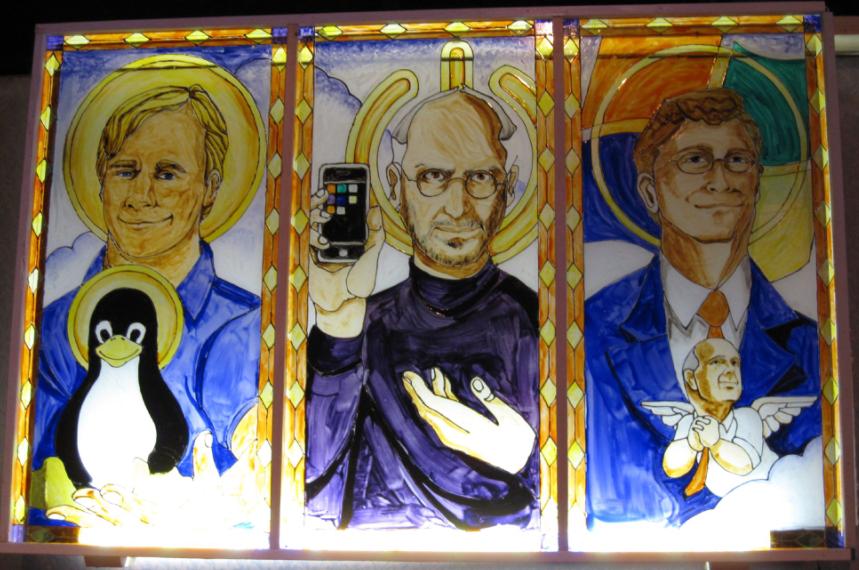 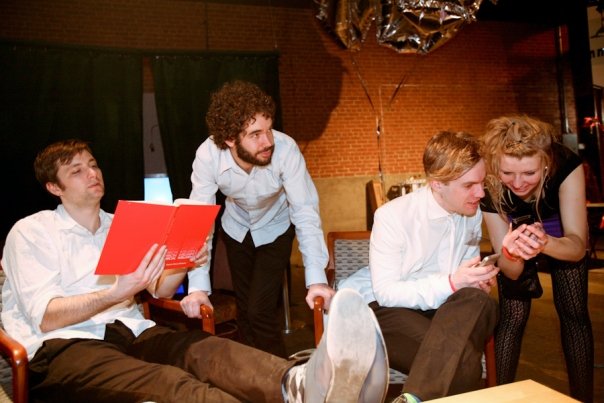 Praying@Home was presented at the Eyebeam MIXER: EXPO, but unfortunately, we didn't get much usable footage. The text below is from our proposal for the event.

Inspired by distributed computing projects such as Folding@Home and SETI@Home, Praying@Home is the name given to a suite of technologies developed by The Institute for Faith-Based Technology, or InFaBat™, innovators in the field of technologically-aided spirituality. The first development is the PrayerRecorder™ - a USB device that plugs into any PC and allows the user to capture her unique Prayer Signature®, an ultra-frequentic resonance that is "broadcasted" by the human body while praying. The user simply attaches the InFaBat Senso-Cap to her temples and forehead, presses a small InFaBat Prayer Paddle™ between her hands, and prays on a particular subject. Meanwhile, the PrayerRecorder captures and records the PrayerSignature to the users' hard drive. Then, using the InFaBat PrayerBroadcaster™, we can broadcast her Prayer Signature, somewhat like an FM radio station that only God can hear! Unlike humans, who need to take breaks from praying to fulfill biological needs, computers need no breaks, resulting in 24/7 prayer output. Additionally, the PrayerBroadcaster unit is equipped with a SPU (Standard Prayer Unit) Amplifier, which increases the strength of your prayers by up to 54%. These technologies truly represent a revolutionary breakthrough in the field of Digital Prayer Technology. 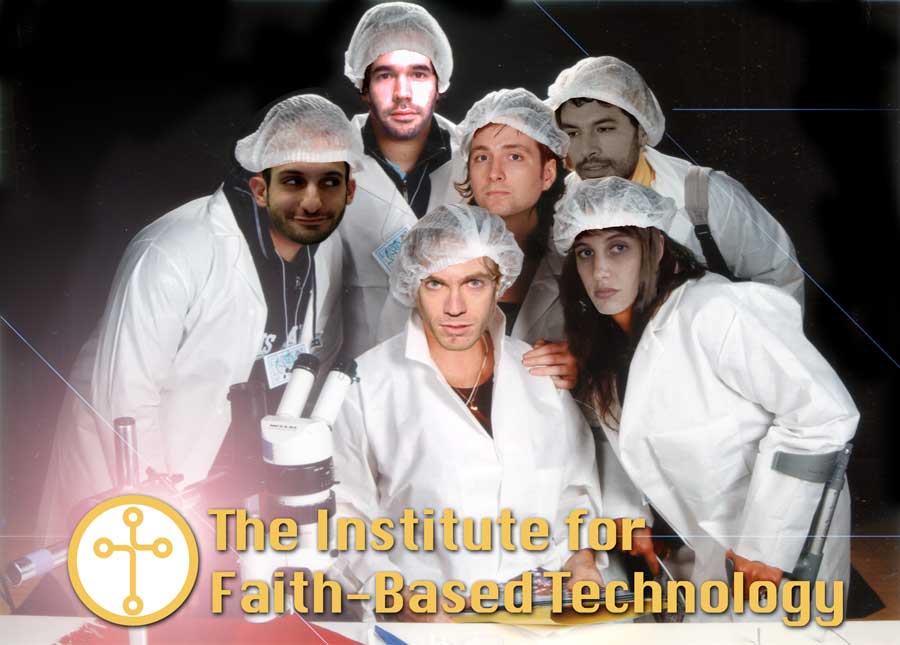 Our display at the Expo consists of a small, tastefully decorated booth - 8 feet wide, 6 feet deep, and 8 feet tall, containing a solid white prayer bench facing a white computer screen on a white altar and hundreds of pure white candles: a mix between a confessional and a blood-giving station. An attendant in a white lab coat and a priest's shirt and collar stands by to help users. Choral music plays from speakers positioned in the far corners of the booth. Adorning the proscenium of the booth is a large glowing sign that displays the number of Standard Prayer Units (SPUs) that we have collected over the course of the Expo. Our goal for the Eyebeam Mixer Expo is to collect 375,000 SPUs, focused on a variety of urgent problems faced by the world today. Above the SPU meter is a glowing sign with the words "Institute for Faith-Based Technology: Come Experience The Amazing New Digital Prayer Enhancement Technology". Atop the booth sits an InFaBat PrayerBroadcaster, which looks a lot like a large set of rabbit ears. Inside, the both is adorned with religious symbols and imagery. On the prayer bench is the InFaBat PrayerRecorder with the InFaBat PrayerPaddle and InFaBat Sens-o-cap.

Visitors are invited to come into the booth and kneel down on our prayer bench facing the computer screen. A soothing voice leads the user through the initial setup process, explaining how to put on the InFaBat Senso-Cap and position the InFaBat PrayerPaddle properly. The voice will explain that in order to get a perfectly pure PrayerSignature, un-Christian thoughts must be kept at bay because they can disturb the prayer recording process. The voice will suggest that the user get all un-Christian thourhgs out of their system before starting the recording process. The voice will then go through a brief explanation of how the technology works, and instruct the user to start praying. Meanwhile, the InFaBat PrayerRecorder senses and records the peaks and valleys of the users Prayer Signature as they whiz by on the screen on the altar. If, at any time during the process, an un-Christian thought is sensed, an alarm sounds and red lights flash, and the user must start over. On average, this happens to 1 out of every 3 users.

Once recorded, the Prayer Signature and a 2-frame animated snapshot of the user are uploaded to our InFaBat Worldwide Prayer Visualizer. The visualizer is displayed in the form of a large projection above the prayer booth. Participants who have contributed their Prayer Signature are represented inside the visualization by a bubble-like avatar featuring their animated snapshot and prayer signature. The avatars float in a sparkling stew of ephemeral prayer-related iconography. As their prayer is digitally replicated in the InFaBat Mainframe, participants will be treated to dazzling animations of the SPU's emanating from their avatars and then projected into the heavens.

When the user is done, they are given a readout of their Signature, a sticker to tell the world that they contributed their Prayer Signature to a good cause, and a pamphlet will be available that describes the technology behind the system and give users information about how they can purchase the Praying@Home PE system and optimize their prayer output by using unused computing cycles on their home PC.

We also distributed the following pamphlet: 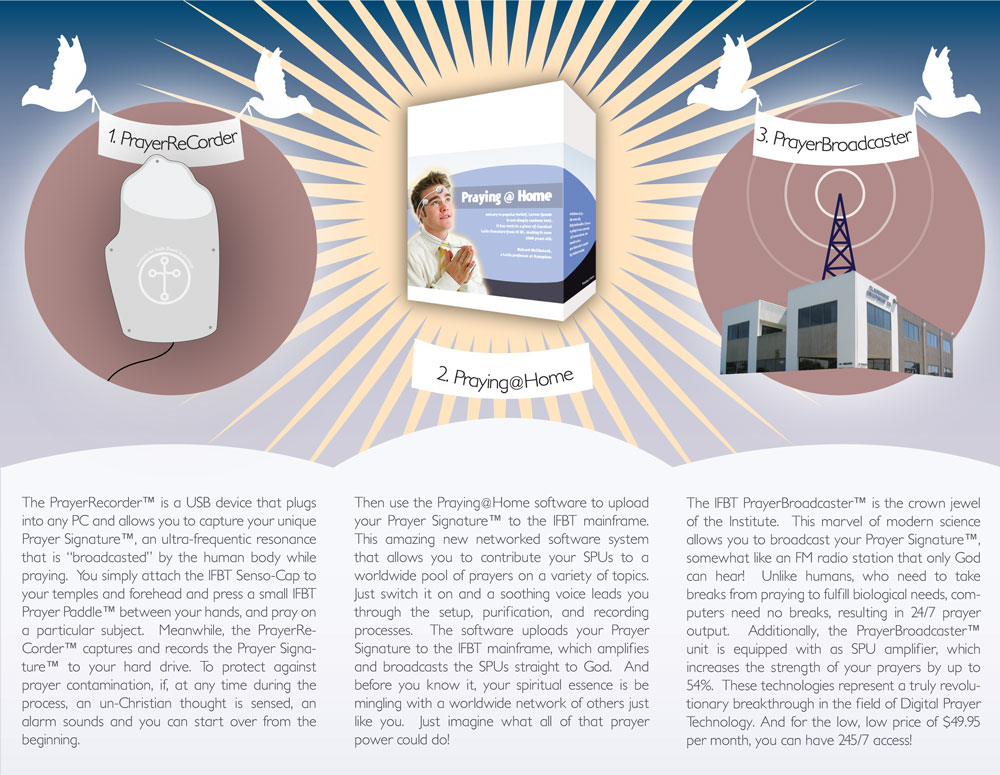 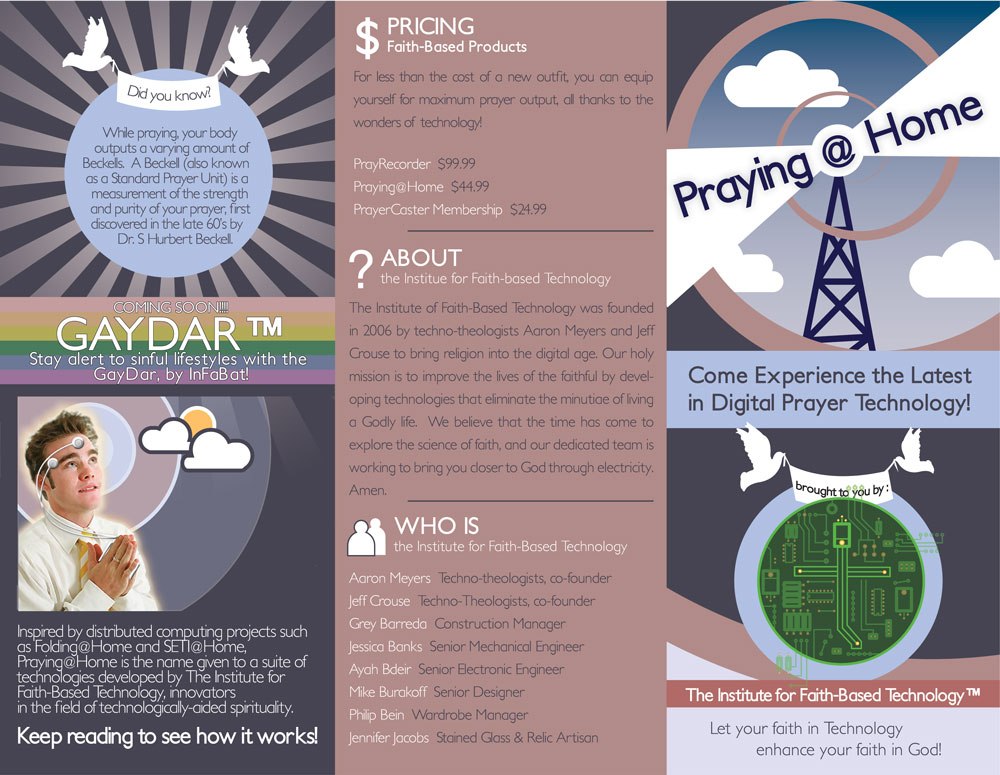 Finally, we "composed" some music for the prayer booths: